is your typical post apocalyptic bad ass with a mysterious past. He’s completely oblivious to his incredible luck, and constantly insists on playing by his own rules. Like most loose cannon types he has a special love of puns and shitty one liners.

Timothy’s deep love of bureaucracy makes him an ideal candidate for the assistant manager of the Number Two litter mine in the feline city of Featherstick. While Timothy’s position gives him the power and validation he so desperately seeks, he is widely considered to be a “fat, shit-faced little turncoat” by his fellow humans. This may or may not be a correct assumption.

Is the longest surviving human in the Battle Zoo. She takes no allies, and has no ambition to win the games and leave the arena. She is considered “bat shit crazy” by organizers and fellow contestants alike. She is kept in the Battle Zoo due to her brutal killing style, her extensive collection of chainsaw weaponry, and her role as fan favorite.

Is the head of all military operations in the canine city of Butthole. The General is retired from active duty, though he is still lauded for his bravery in combat during the First Animal Uprising, and for his inspired leadership during the Great Dog and Cat War that followed. He now spends his days advising King Murderbone, and overseeing many secret missions of his own.

Nothing is currently known about the background of this mysterious killing machine. Perhaps if he becomes popular enough in the Battle Zoo, someone will start a Wikepedia page about him. 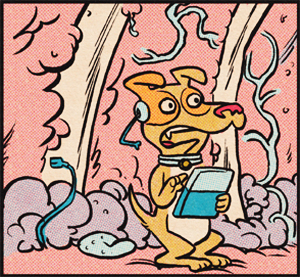 Is a hardworking segment producer, responsible for Tim and Manigan’s preparations for the arena. 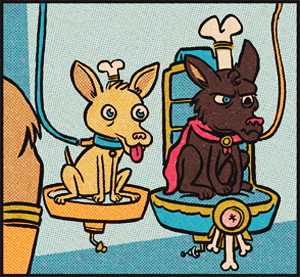 The Murderbones came to power after the Great Dog and Cat War.
It is widely believed that the King is merely a puppet ruler, whose strings are pulled by General Vickers. He spends most of his time enjoying the kingdom’s most popular diversion: Battle Zoo. By maintaining his public image on television, the King insures that his family is secure in their royal position.

Warning: preg_replace(): The /e modifier is no longer supported, use preg_replace_callback instead in /nfs/c02/h04/mnt/17511/domains/battlezoocomic.com/html/wp-content/themes/mgsisk-inkblot-fd742bc/footer_top.php on line 1